As the ‘first-call’, ‘boots-on-the-ground’ IT administrator for the family of companies I work for I need a dependable and flexible laptop.

My Dell XPS 12 (2012) has served that role competently since I purchased it at launch. It’s tablet-like functionality is pretty nice in quickly navigating through many tasks. Then you have normal laptop input when more nuance is needed. Where it eventually fell short is not having a built-in Ethernet port, forcing me to use awkward dongles. Boy those get old after a while. It was also very top-heavy as a laptop, and even on a flat surface wanted to tip backwards. And on top of all that, the Ivy Bridge processor was just not as power efficient as I would like especially with the ground that Haswell and Skylake gained in that arena.

So the time came for an upgrade. My criteria were very simple:

Turns out there are very few machines that meet all these criteria. The hardest thing is finding machines with built-in Ethernet that are not either bulky or cheaply built. Much less in the size range I needed.

After much searching, I ended up at a machine line that I had drooled over before. The Thinkpad X200 series. It just so happened that Lenovo was releasing the Skylake based X260 soon after I began searching early this year. Initially, they were only offering a 768p screen, I bided my time and eventually they opened up customization and offered 1080p IPS screens. So now it met all my criteria! I saved a little coin by not splurging on the SSDs that Lenovo offered and decided to install a spare ADATA SP600 I had from my TestCore turned FreeNAS.

The configuration I decided on was:

I have had a little hands-on time with IBM and Lenovo Thinkpads. I think the best way I could describe them is reliable and confidence inspiring. Even not knowing anything about all the work they put into making sure that anything with ‘Thinkpad’ on it will live up to that name…you can just tell that this machine is a tad better that the other guy’s. Some might question my decision to go Lenovo with all the spyware and security drama. Not to mention the fact that they are slowly running the Motorola name into the ground. Most of the drama was around the Superfish spyware that came bundled with the Ideapad line and never touched the Thinkpad line (Consumer vs. Business). That is just real poor decision making that every OEM has or is doing on some level. My doing a fresh install on the SSD solves all the crapware problems that one might find with any OEM. Then there is the Lenovo Service Engine drama that was blown way out of proportion. They were utilizing a method of installing support software via the BIOS that Microsoft provides in Windows. This software installs even on fresh operating system installs. Microsoft changed their policy on using this method after learning how fully OEMs were using this and Lenovo ceased doing it and release a patch to prevent it from running after install. This is similar to how connected Windows 8 and 10 are. How Microsoft wants feedback on everything people are doing with the OS. I understand the desire to want as much feedback as possible to improve your product and ensure returns on a very low margin business. These are multi-billion dollar companies. They do not care about your personal data. They just want to know if you tend to hit this button or that. Or how often you run a particular app and how you launch it. Sure we need to take them to task when we catch them being irresponsible with the collection of this data and Superfish was a huge overstep, but they have a legitimate claim in wanting an eye into the usage of these systems.

Anyway, I was not deterred by the controversies surrounding Lenovo. And I am so glad I wasn’t. I love this machine. It serves my purposes so much better than the XPS12 ever could. It fits in my bag a tad better. It is lighter. It has physical mouse buttons. And most importantly…it has Ethernet. 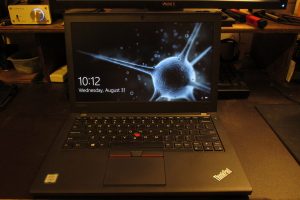 While it is not build as tank-like as Thinkpads of the past, it feels very solid and mine does not exhibit some of the QC issues that some on the Thinkpad sub-reddit had seen early on. Even after taking it apart to install the SSD, all the seams are tight.

The keyboard feels a tad better than the XPS12. I am not privy to the more luxurious notebook keyboards out there, and am not composing novels on it, so the keyboard is not a huge category. Of more concern is the actual keys available, and it is even better than the XPS12 in that department. Namely no need to hit function for Home, End, Page-Up, and Page-Down. And NO BACKLIGHT! I hate backlights on keyboards.

The screen is a 1080p semi-gloss IPS screen. It looks good and deters glare well enough. Much better than the glass touch-screen on the XPS12. The initial run of the XPS12 came with a really bad IPS screen that suffered from what appears as temporary burn-in. I see no anomalies with this screen at all.

The touchpad is the best Windows one I can remember using in recent memory. I think there was a nicer HP I worked on in the early Windows 8 era that might be the best ever, but I fail to remember the model. Another bonus is that it has physical mouse buttons. That is getting rarer and rarer on all but the clunkiest laptops. I am new to having the nubbin at my disposal. I always made a point to try it when I found myself in front of a Thinkpad or Latitude and could see the utility. I find myself using it about 20% of the time.

So I guess you can tell I am very satisfied with this machine. It might not be the pinnacle of the Thinkpad name, but I think it carries the torch well in its own ways. It does come in at a much friendlier price point than if they had tried to build a tank. I think some of the material decisions and construction methods make for a rugged, yet unassuming package that suites its place in the modern PC market perfectly. And like most of this article rants on about…there just aren’t a lot of machines in this category and I think it is laps ahead of the competition.