Of salt and memories

Any geek worth his salt has had to boot a PC or a hundred from a USB flash drive to repair, recover, or re-install. Those that are REALLY worth their salt have put many a flash drive to pasture from repeated ISO unpacking. Being the resourceful geek that I am, I run around with a multi-boot utility on a flash drive that allows me to boot into any number or tools and operating systems. My utility of choice is YUMI. One drawback to it is that you can only have one Windows install available at a time, so I still abused the memory quite a bit due to my having to work with everything from XP to 8.1; throw in 32-bit and 64-bit variants and you have a lot of unpacking still. I solved this problem somewhat, by switching to a 500GB portable USB drive. A spinning disk can take the abuse much better and is actually faster for writes than the cheapo NAND and controllers you find in run of the mill flash drive. However, I found that many machines that I work with end up not being able to boot from my USB-HDD at all. I needed to find another way…

Enter the Zalman ZM-VE300. It first came to my attention in a video covering Zalman’s booth at CES 2014. And a later review by the same people. It is no normal portable drive enclosure. The VE300 can emulate an optical disc drive (ODD) and mount one of any number of ISOs that you store on the enclosed hard drive. There are 3 modes to optimize for different use cases: HDD, ODD, and Hybrid. HDD mode makes it behave like any USB HDD and lets you access storage. ODD mode emulates an DVD/CD-ROM drive and lets you select an image to mount and boot/load. Hybrid mode exposes both ‘devices’ to the system. You select the modes with a jog dial the flicks up & down, and select items by pressing it in. There is a ‘Back-Up’ button that interacts with Zalman’s bundled back-up software and serves as a back button in menus.  The back-up software will not be discussed here as I have no need for in my use case of the enclosure. The ISOs are stored in the root directory of your drive in a folder that you label “_isos”. The rest of it can be used for whatever storage needs you have. 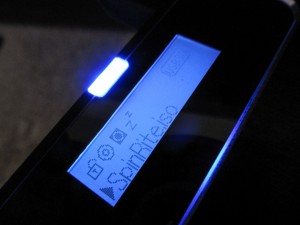 I will answer the burning question of whether the drive ‘does what it says’ up front…YES!. It has booted a number ISOs on a handful of machines that I tried it on. Only one PC failed to play nice with it; my old Dell e1505 laptop. It recognized something was plugged in, but complained that no OS was present. Every other PC loaded the selected ISO without any complaint. There is a trick to getting things going though. You need to enter either a boot menu or BIOS screen to allow the drive to be powered but idle. This is so you can select the correct mode and ISO to boot to. On most computers it is best to do this anyway rather than hope it is setup to boot willy-nilly from any random drive thrust into it. Once you have selected a mode and ISO you just select the Zalman from the boot menu or restart if you went to BIOS and maybe enter the boot menu if you couldn’t change the boot options to prioritize it. If all goes well, your selected ISO should load as if it was sitting in the disc drive. I opted for a Crucial M500 SSD to occupy my VE300 so this goes ridiculously fast. I chose an SSD to avoid moving parts. Memory wear will be minimal as I will not be using it for storage, only multi-booting. I still have the my 500GB portable drive for storage and recovery dumping.

A grain of salt

It wasn’t a painless endeavor turning this beauty into a multi-booting beast. Long story short, I had to end up pre- formatting the SSD before using it in the enclosure. A problem that might have been quickly solved by another man, but it took an off hand mention in a YouTube review/tutorial to guide me to the solution. Nowhere in the limited and highly visual manual or any other documentation did it mention that you might need to format your drive prior to insertion. This could be a big speed bump to even a slightly lesser geek that might lead them to believe they purchased either a bunk drive or enclosure. I will have to drop a suggestion Zalman’s way on filling out that manual a little. And if I am going to knock it on anything else…I think the dial needs to be rethought. It just feels chinsy and really cuts down on the fit and finish. I don’t see it standing up to too much manipulation, but I hope I am proven wrong. Some other reviewers might knock it for its interface, but I like the dead simple UI. Hard to get lost or screw anything up. 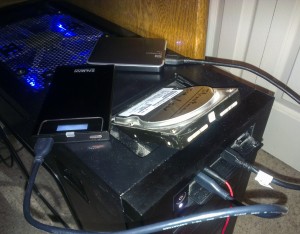 But you can never have too much salt

With all that said…I freaking love this thing. It solves a huge problem that I run into repeatedly in my professional and private dealings with computer repair. Short of the odd PC that doesn’t play nice, it allows me to instantly boot any install disc or recovery tool or password reset or memory test that I need for a particular task. No more fumbling around getting the right assortment of install image and tools,; all the while eating through the life expectancy of my flash drives. I of course still carry a couple flash drive with a few select tools on them so I can leave them running for extended virus scans or SpinRite sessions, but the ZM-VE300 it never leaving my go bag.

Felt the need to reiterate how ridiculously useful the VE300 is. What blows me away more than anything is that this isn’t even a product category. It ,and it’s variants from Zalman, seem to be the only devices that serve as a virtual optical disc drive that mounts on-board ISO’s. There are no other such devices that I could find in my research. And it is not like they are perfect. There is the finicky setup and the industrial design could use a closer look. Sure, people aren’t demanding such a device, but I have never seen a device with zero competition. These facts don’t make me love the little guy any less, though. Since writing this review originally it has proven invaluable in cleaning, restoring, and troubleshooting a plethora of machines. Still a must buy!